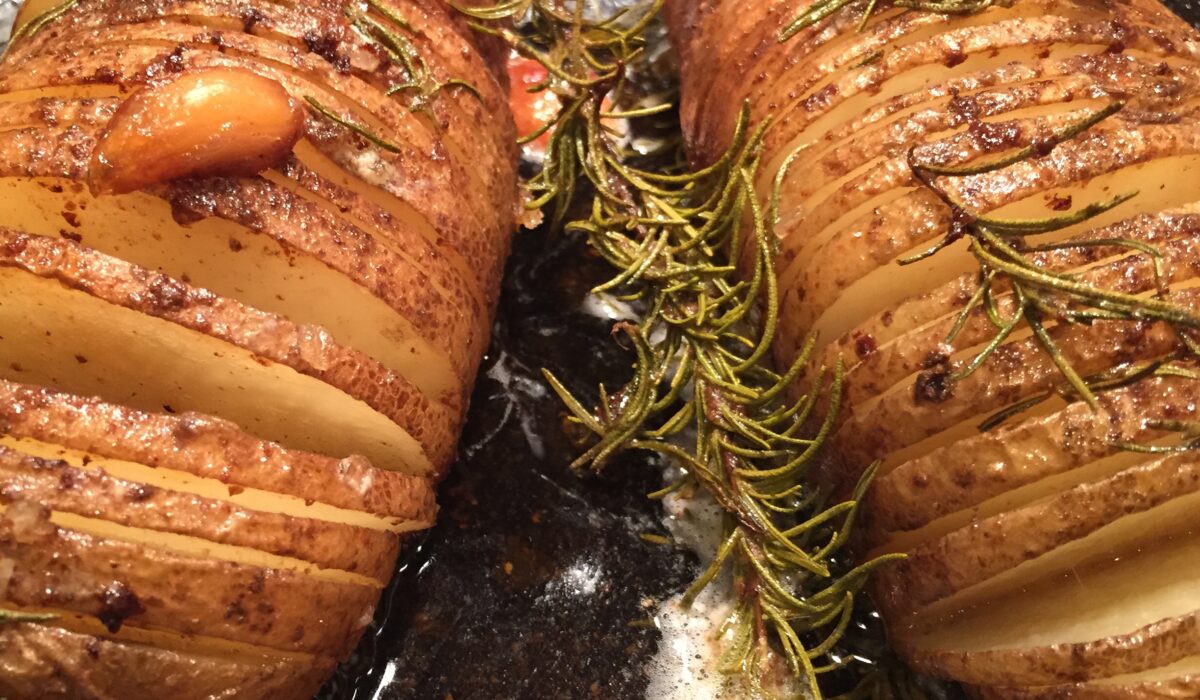 My previous post about Hasselback Potatoes will give you all the background and basic history of these delicious spuds. In this post I’m only going to focus on my recipe variation and cooking technique.

Egg Setup: This time around I set the egg up for a direct cook because I knew I was going to use a cast iron pan for the cook. Get your egg to about 400-450 and let it sit there and hold temp while you prepare your spuds.

Because I was using regular russet potatoes for my Hasselbacks, the prep was really simple: scrub the skins with a sponge and let air dry. Once dry, the potatoes are then sliced into ¼” slices, ¾ the way through the potato.

Pro Tip: Place a wooden spoon beside the spud to act as a guide – this will help prevent you from cutting all of the way through and will help maintain a uniform fanning of the Hasselback.

Once you’ve sliced the potatoes and hopefully not your fingers, now you are to rub butter on the potatoes, getting in between the slices where possible and then season with salt and pepper. You won’t need to get butter between every slice, we’ll be basting later. Also throw in some rosemary sprigs and a few pieces of garlic (smashed). Then give the pan a nice dollop of olive oil to round things out. Yes, exact measurements are not my thing.

Cooking Hasselbacks on the BGE

Once you’ve prepped the Hasselbacks and have your BGE at temp (remember, holding steady at 400-450 with no flare ups), simply place the cast iron pan on the grill and close the dome. Don’t open that sucker up for another 30-45 minutes. After 30-45 minutes, open the dome and admire your handy work – by now the spuds have begun to beautifully fan out and are actually starting to look like the fancy ones we’ve all seen before. Use this time to baste the spuds with the drippings in the pan, prepare to add more butter if needed.

Pro Tip #2: At the half way point of your cooking time – apply a second round of butter. Melted butter will be much easier to drizzle over the heat of the Egg – just don’t douse them with so much it spills over and causes flare ups.

Once the 2nd round of butter is applied, close the dome again and let the Hasselbacks cook for another 15-20 minutes and baste again. Continue this process for about 45 more minutes to an hour, basting at 15-20 minute intervals. Because these are not wrapped in foil, they will take a bit longer then a baked potato – just keep that in mind.

The bottoms of these potatoes will be nice and crispy and full of flavor. The smell of the rosemary, garlic and butter alone is almost too much to stand – and these are so good you don’t need to serve anything else. Heck, serving anything else would take away from the splendor of these spuds.