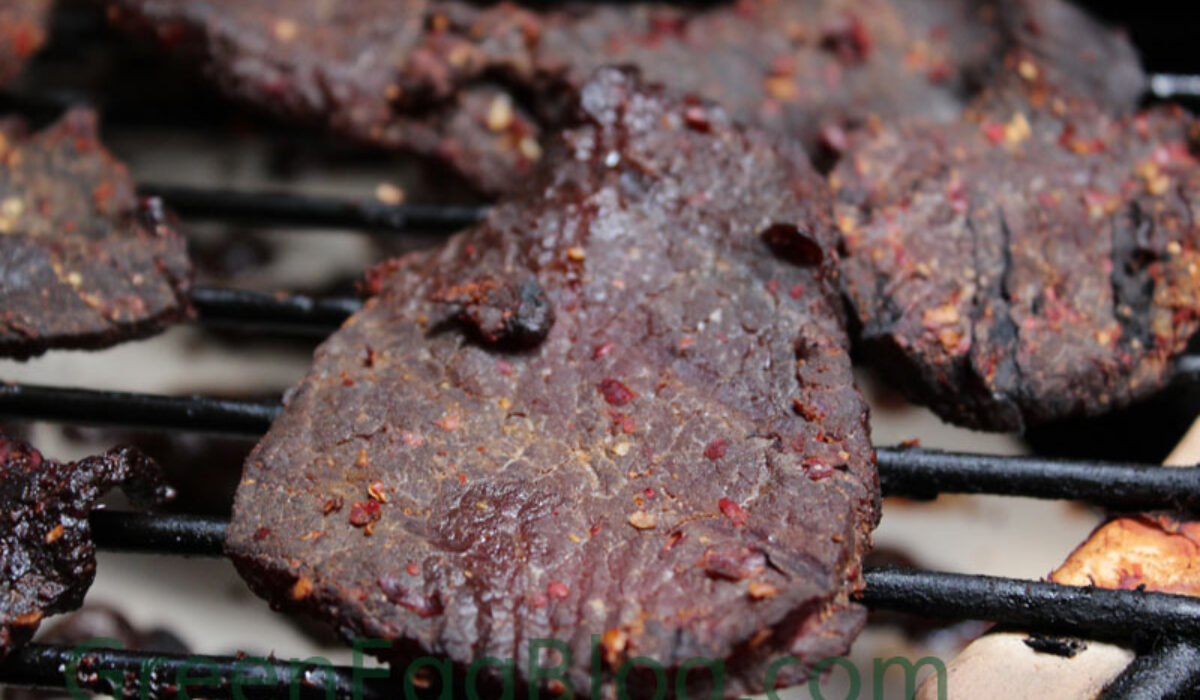 As I reported previously, I was going to be attempting my first go around of beef jerky on the Big Green Egg. Go here for the Big Green Egg Beef Jerky Recipe that I used. I got the Eggs fired up around 10 am on Saturday – having run all my errands earlier in the morning to make sure I could tend to the cook. I even got a new plate setter for the new egg (frankly, they should just come with it) and a new bag of the BGE lump.

I brought both eggs up to 250 degrees, added pecan chips to one and cherry chips to the other – got the plate setters in place and started putting the meat on. It was a smoke fest! Once I got my shots, I closed the eggs and shut the doors so that the temperature came down to 160. On my older egg, it got right there and stayed there – some things really do get better with age. On the new egg, the temperature dropped way down to 100 degrees – almost lost the fire, so I opened it up a bit more and let it cook at 180 degrees – I could not get it lower then that. But this is only her 3rd cook – so I’ll let it slide.

I checked the meat after about 2 hours – moved pieces around and flipped them – then shut the lids again. After another 2 hours, I did the same. Then 3 hours later, I pulled the jerky off the grills for a total cook time of 7 hours. Honesty, I thought it would take much longer then that – but I need to get dialed into a lower temperature to extend the cooking time. Once the sting of the new egg purchase wears off, I’ve got to work on getting myself a Stoker – though I think I’d rather have my BGE Egg table done so that I could incorporate the system directly into the build – but that’s a story/mission for another day.

So how’d the jerky turn out? Delicious – maybe a little too sweet for my tastes – but it has plenty of spice to balance it out. The molasses was really key to the sweetness – so make sure you like that flavor before using it. Next time around I’m going to find some Jerky cure and see how that works. But you can bet that the jerky will be gone within a week – it doesn’t stand a chance at the office!