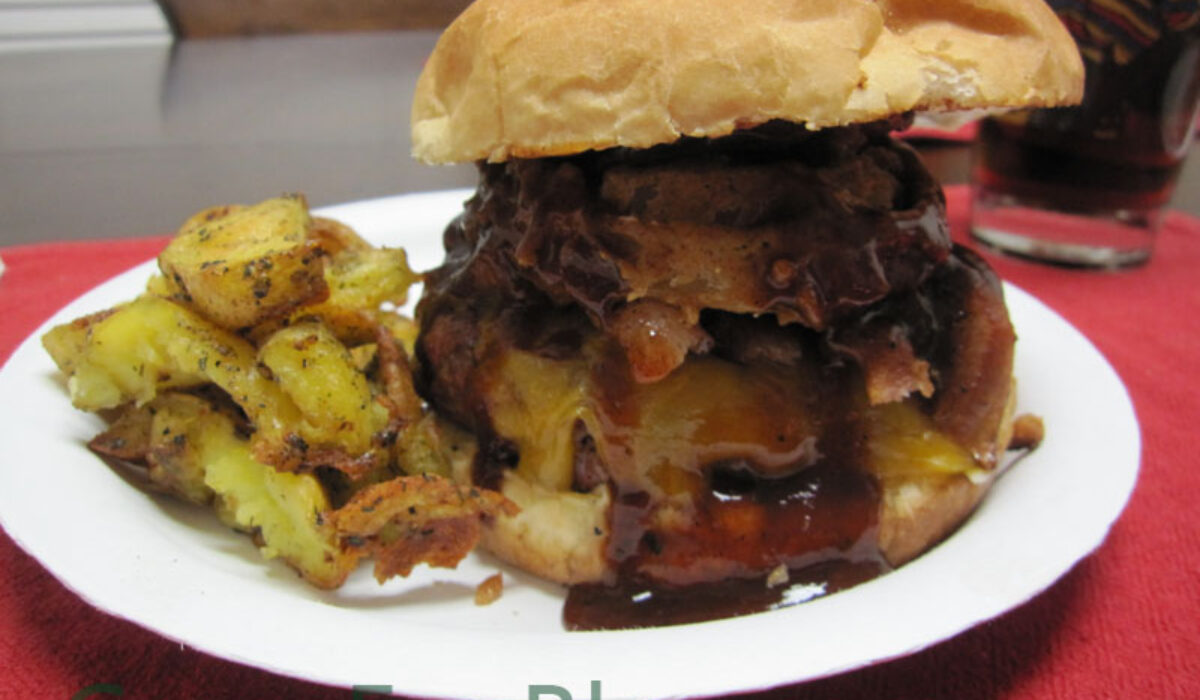 I was given Bobby Flay’s Burgers, Fries, and Shakes

Cookbook a while back – probably when it first came out and I admit, I haven’t cooked much from it. But what I have cooked from it has been absolutely delicious. The Cheyenne Burger is among the most intensive in the cookbook because of all the different elements – homemade BBQ sauce, Onion Rings and then the Burgers. In my case, since I already have a ton of BBQ sauce laying around, I went with just making the Onion Rings and Burgers.

Divide the meat into 4 equal portions (or 8 equal portions if making sliders). Form each portion loosely into a 3/4 in thick patty and make a deep depression in the center with your thumb. Season both sides of each burger with salt and pepper.

Cook the burgers 3-4 minutes per side (depending on your BGE temp and desired level of doneness) and topping each one with a slice of sharp cheddar cheese during the last minute of cooking.

Place the burgers on the bun bottoms and slather each one with barbecue sauce. Top with bacon and shoestring onion rings and then the bun tops and serve immediately.

Peel the onions and slice them crosswise into 1/4 inch thick slices. Separate each slice into individual rings and cut each in half to create onion strings.

Heat the oil in a heavy bottomed medium stockpot over medium heat to 375 degrees F. Line a baking sheet with paper towels and set aside.

While the oil is heating, put the buttermilk in a large baking dish and season liberally with salt & black pepper. Divide the flour between 2 dishes and season each dish with salt and pepper and 1/4 teaspoon of cayenne.

Working in batches, dredge some of the onions strings in one of the dishes of flour and tap off the excess. Dip the strings in the buttermilk, allow the excess to drain off, and then dredge the strings in the second dish of flour, making sure to coat the strings evenly. Tap off the excess and transfer the batch of coated strings to the hot oil. Fry the strings, turning once or twice, until golden brown and tender, about 4 minutes. Remove with a mesh skimmer and drain on a baking sheet lined with paper towels. Season immediately with salt. Repeat until all of the onion rings have been cooked. Serve hot.

So was all of this cooking worth it? Absolutely – the burgers were amazing. Something I would only cook on special occasions, but fantastic. And I don’t even order burgers with BBQ sauce – I like mine with jalapenos, pickles and bleu cheese when I can find it. So for me to convert to a “western” type of burger is a big deal. Try this one out – you’ll be glad you did!

This site uses Akismet to reduce spam. Learn how your comment data is processed.