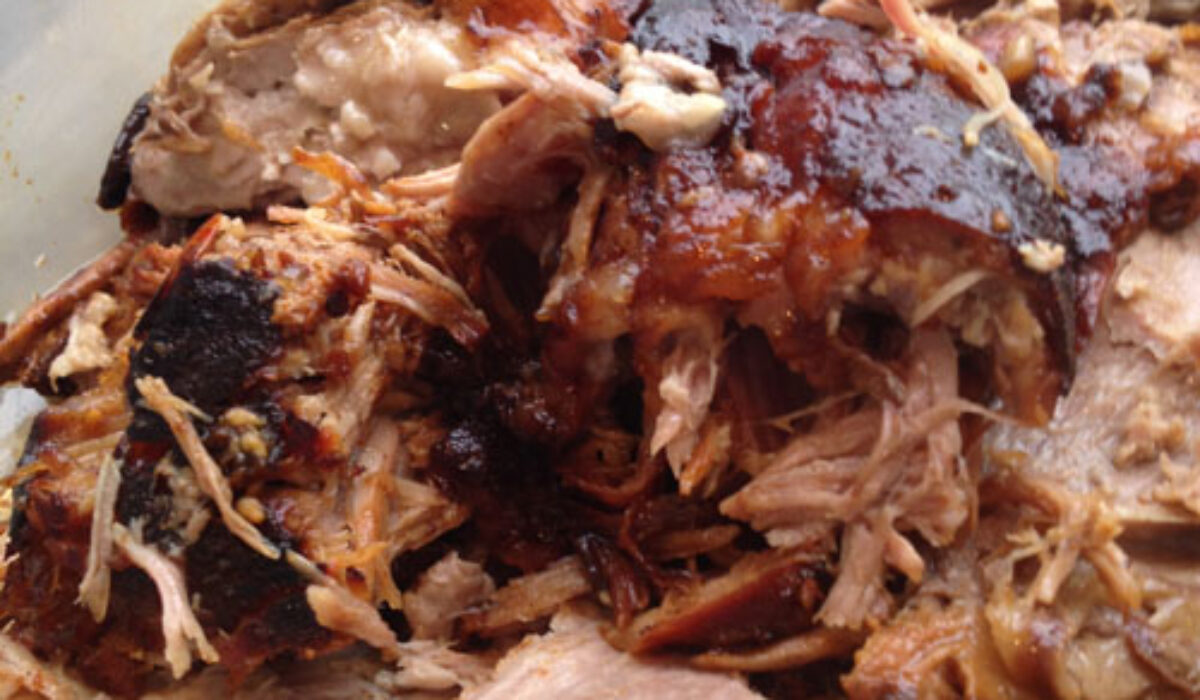 I love using the slow cooker during the week and have used a scaled down version of this recipe (half the pork butt) several times to make for an awesome weeknight dinner, but this time around I decided to try it out on the Big Green Egg and the results were amazing. Borderline off the charts fan friggin tastic.

Egg Setup: This is going to be a low & slow cook – so I set up the egg with the plate setter (legs up) and the grill on top of that. The pot is going to go directly on the grill. Get the Egg up to about 400 degrees (dome temp) and then bring it down to a steady 300 degrees – now you’ve got yourself an oven!

The preparation of the pork butt is simple – rinse it if you want, or don’t (no sure what the FDA says about that) and then season with salt and pepper.

Once your pork butt is prepped, rough cut 1-2 onions (small whites for me) and place in the bottom of your pot. For my pot, I used a regular camping grade pot that I picked up at Wally World – anything with a heavy bottom and a lid will work. I also through in some tomatoes that I had lying around from the garden and a jalapeno for extra bite. You can leave these out and everything still works just fine – or throw whatever else you have laying around in the pot too – garlic wouldn’t hurt here.

Once the fresh veg is in the pot – place the pork (that you’ve already salt and peppered) in the pot – then dump 1 can of chipotles in adobo over the butt, then ½ a liter (or 2 cans) of Dr. Pepper. I also added 4 Tbsps of brown sugar – again, something you can keep or omit here. And that’s it – you’ve prepped and put everything together that you need.

Now it’s time to put your concoction on the BGE – remember your temp is holding steady at 300-325 degrees dome temp. If all of that checks out – place the pot on the grill with a tight lid and close the dome – don’t open it again for 3 hours.

After 3 hours, open the BGE, turn the roast in the pot (flip it over) and shut everything again for another 3 hours.

After 6 hours – check it again – the meat should rip apart easily with a fork, if not, let it cook longer. If it’s pull apart fork tender, then you are good to go.

Shut the Egg down to a holding temp of 200 degrees and remove the Pork Butt from the BGE. Once back inside your kitchen, remove the butt from the pot – preserving all of the liquids for later. Shred the pork and try not to snack it all away while you prepare the sauce.

For the sauce – cool the liquids from the cook and strain off any fats that you can. Then using an immersion blender, blend up the sauce right in the same pot until it’s a uniform consistency. Then place all of the pork back in the pot and put everything back on the BGE until you are ready to eat.

Alternatively you can keep the pork and sauce separate if you wish – but that’s up to you.

Serve either as Pulled Pork Sandwiches, just straight pulled pork or even pulled pork tacos – how you eat it is up to you – just make sure you had fun making it.

The veg in the pot

Half way through the 6 hour cook

Dr. Pepper Pulled Pork Ready to Come off the BGE