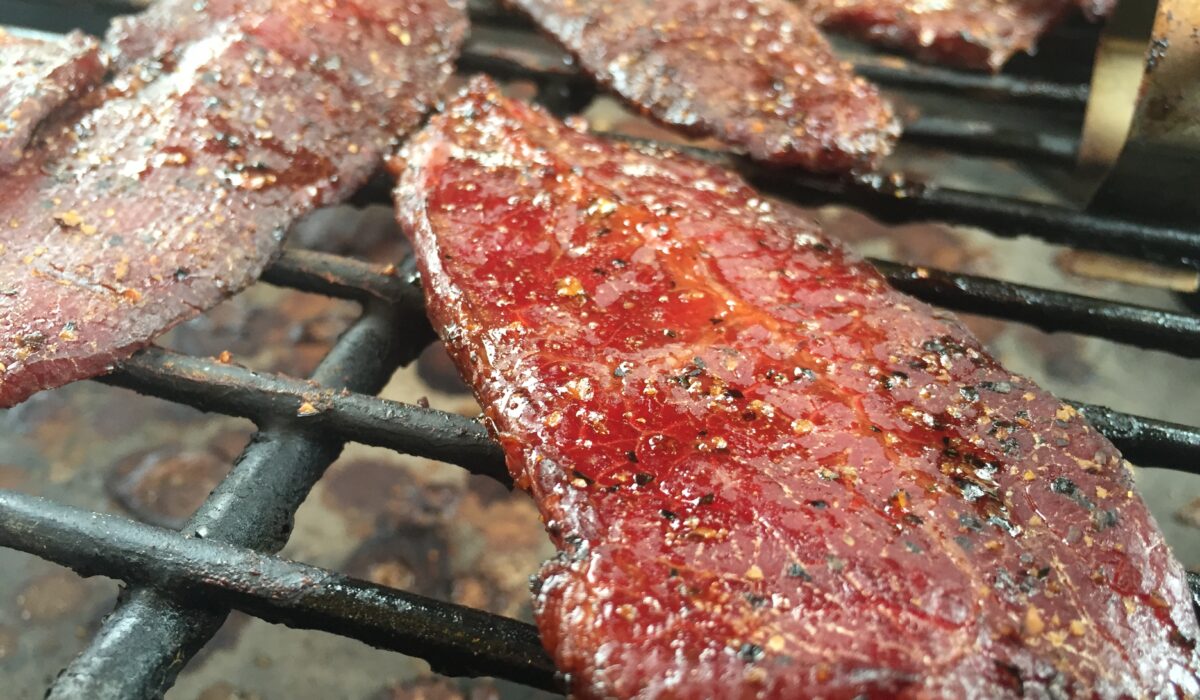 I’ve spent a lot of time smoking jerky on the egg. In fact, one of the primary reasons that I bought my 2nd large egg was to expand my grid space and smoking capacity specifically for jerky. I’ve experimented a lot with wet and dry brines/cures. I’ve tested smoking methods and various cuts of meat. The result of all of that testing? Lots of delicious jerky and very few complaints. The simple fact is you can cure and smoke jerky any number of ways and it can come out great no matter what. So don’t be afraid to experiment and play around – below is my most recent variation of smoking jerky.

I brought the egg(s) up to about 400 degrees before shutting the lids and vents down to 1/4″ opening and then added the mesquite chunks on top of the lump. And a plate setter legs up for indirect smoking. My target dome temp for jerky is anything under 250.

I have also learned to lay the jerky out on the grid outside of the egg, this way the egg lid isn’t open while I’m laying the meat out, causing the temperature to spike.

Once the meat is all laid out, in the egg it goes. For this cook I also added a DOT thermometer to the grid level using the High-Temp Air Probe to measure the temperature right at the grid/meat level. Not necessary but it does allow for better control/reaction. If the temp at the meat level goes over 210, I know it’s too hot and going to cook too fast. I’ll check on the jerky every hour, flipping and rotating the slices. Without rotating, your slices closest to the edge of the plate setter will get extra crispy thanks to the air flow around the plate setter.

At 250 indirect, my jerky will finish in 4.5-5 hours. I’ve smoked jerky for much longer then that – but at 4.5 hours, this batch was perfectly done.

I know the jerky is done when a slice is bent and it cracks but doesn’t break all the way apart. You don’t want crispy beef jerky – you want some chew to the pieces. Once your jerky is done, remove from the egg and let cool before bagging. Jerky will last about a week in a ziplock bag – longer if you vacuum seal it after smoking.